Sport Volleyball Varsity Home Score 2 Away Score 0 Game Recap This was game one of our tournament at Grand Haven High School on Saturday, August 18.

Sport Soccer Varsity Boys Home Score 3 Away Score 0 Game Recap Both teams started the game out nervous as it is the first game of the season. The first 10 minutes saw Wayland put pressure on the Eagles defense and create a few opportunities early. Afte the 10 minute mark of the first half

The boys scored early, late, and often shutting out the visitors from Wayland by a final score of 8-0. Despite being the first game of the year, the boys appeared ready to go from the start and continued moving the ball well all game long. First half goals were scored by Brendan Sieggreen, Spencer Shamery,

Calling all soccer fans! The varsity boys season gets underway Friday, August 17 as your Eagles host Wayland at the soccer stadium at 5pm. The JV squad will also begin their season against Wayland following the varsity game. Concessions will be open so come celebrate the start of a new season with us on Friday!

The girls volleyball season is underway! Tomorrow afternoon (Thursday, August 16) all three levels will compete in scrimmages.  The freshman will be at Unity, JV will be at Jenison and the varsity will be at Hudsonville.  The scrimmages are from 3:00-6:00pm and all parents are welcome to attend! If you plan to attend the varsity

All scrimmages are Thursday August 16: Freshmen are 9:00 AM at Jenison JV is 9:00 AM at Forest Hills Northern Varsity is 7:00 PM at Jenison

Swimming and Diving practice will begin at the High School Pool on Wednesday, August 8 at 7:30am to 10:30am.  Please plan on being on time!  Practice Schedules and Suit Orders will be processed at this practice.  You must have all of your critical information(insurance waiver, pay to play, athletic handbook, and physical ) into the

Eagles News · Jul 26 Getting Ready for the Fall Sports Season

The upcoming fall season is right around the corner and the athletic department wants to make sure everyone is ready.  Here is your pre season checklist: 1.  Physicals need to be turned into the office before  the first day of practice. 2.  The athletic handbook and insurance waiver needs to be signed and turned into 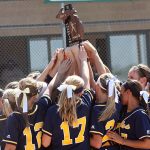 Eagles News · Jul 18 Welcome To The Home For Hudsonville Sports

Welcome to the new Hudsonville Athletic Website!  As an athletic department we are continually trying to find new and better ways to communicate information to our parents, athletes, coaches and community.  We are hopeful this site will be that communication tool. We are still in the developmental stage, but here is a list of services